Larco Investments is excited to announce their proposal calling for an adaptive re-use of the existing Dominion Public Building at 1 Front Street West in Downtown Toronto that would transform it into a destination with new retail and restaurant space, rental housing and a boutique hotel. The proposal also seeks to add a pair of architectsAlliance-designed towers of 45 and 49 storeys including the heritage podium, in a project known as One Front. 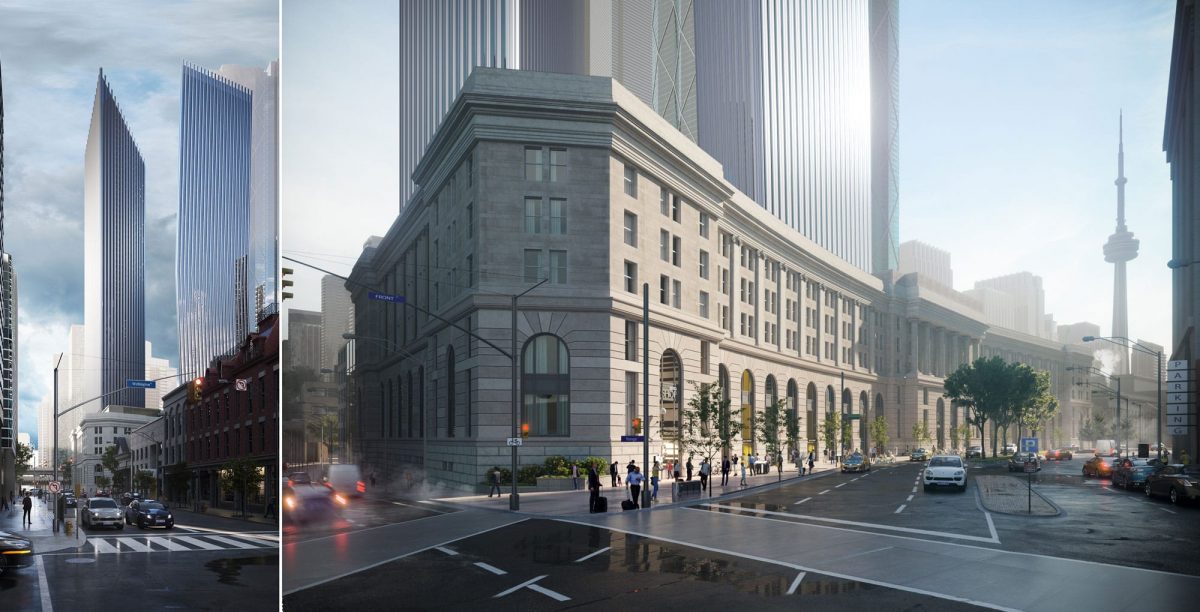 The two towers would rise above the east end of the heritage building, closest to Yonge Street. The taller west tower would reach a height of 170.8 metres, while the east tower would rise 163.8 metres. The east tower, closest to Yonge Street, would feature a triangular floor plate to create a three-sided tower, while the west tower would take on an extruded trapezoidal massing. These massings aim to address Toronto’s tower separation guidelines with a gap ranging from 22.78 metres to 27.25 metres, (the City’s guidelines call for minimum tower separations of 25 metres). The space between the two towers would allow for sunlight penetration and views for residents. The east tower would have a 34-metre separation distance from the L Tower. The west tower would have a minimum separation distance of 25 metres to the CIBC Square north tower.

The heritage building currently on-site would have its facades retained entirely, with minor modifications for such things as improved entrances to the building. Major interior modifications are proposed, however, to support 8,986 square metres of retail space and a 22,045 square metre boutique hotel. While the ornate “long room” on the ground floor is among the heritage elements planned for preservation and incorporation, the ground floor’s Front Street frontage would be lowered to street level, and the second floor would be removed entirely to create a double-height main level.

The site’s adjacency to the second phase of CIBC Square at 141 Bay Street means that underground loading docks can be shared between the two developments, while parking in the three-level underground garage will be accessed through the P2 level of the CIBC Square garage. 94 residential parking spaces are proposed on the P1 and P2 levels, and 89 commercial parking spaces on the P2 and P3 levels. An additional 16 car-share spaces would be housed on the P3 level. Proximity to Union Station is being cited as a reason for limited parking, though the garage is also set to include 842 long-term and 84 short-term residential bicycle parking spaces, as well as 22 commercial long-term and 38 commercial short-term bicycle parking spaces.